Native app is a term commonly used to describe a particular kind of app in software development.

A native app, in a nutshell, is a software program developed for use on a particular platform (Android, iOS) or device written in language that is native to that platform. A particularly important advantage of native apps is that they can take full advantage of the device features and latest system updates. Additionally, native apps have an extensive  list of libraries that are made specifically for a given platform so that you can make the most of it.

Probably the biggest differences between native apps and others occur when it comes to working in the background or using a camera and its features. Respective platforms have different policies and restrictions for what is possible.

Native apps are built with the use of different programming languages depending on which platform they are built on: Kotlin for Android and Swift for iOS. 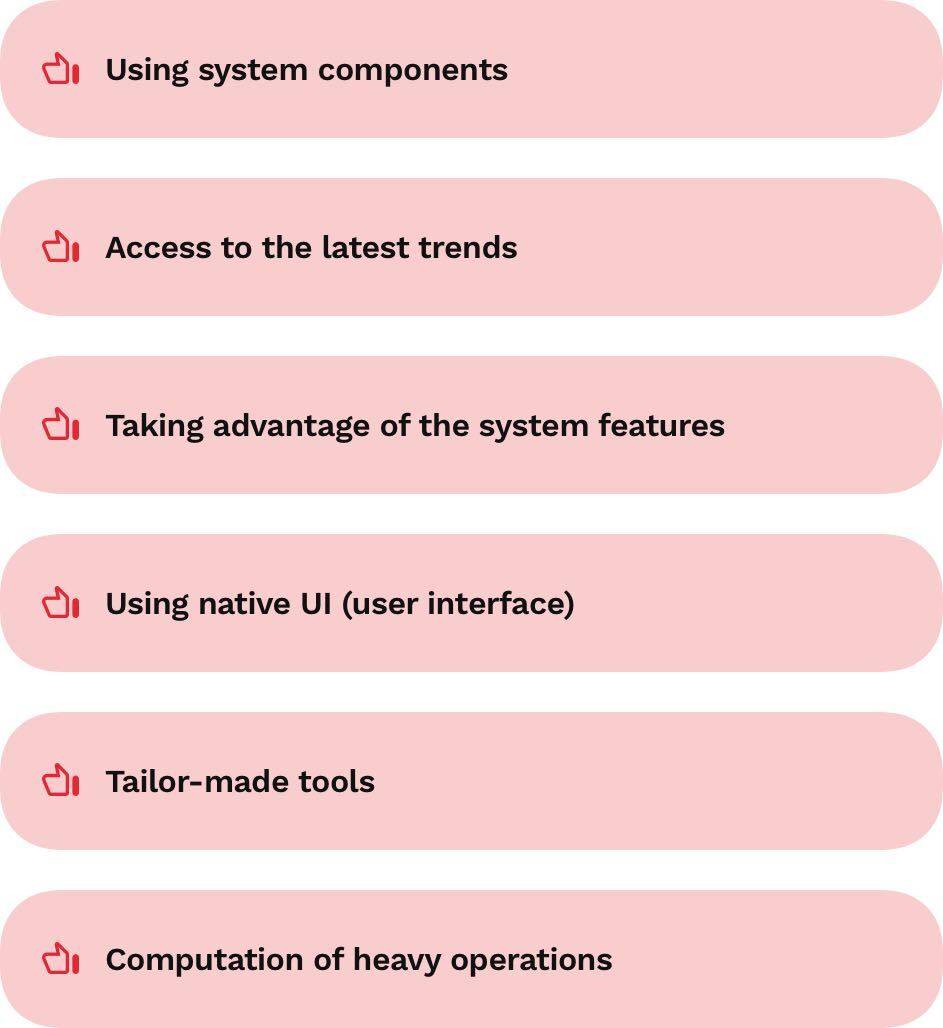 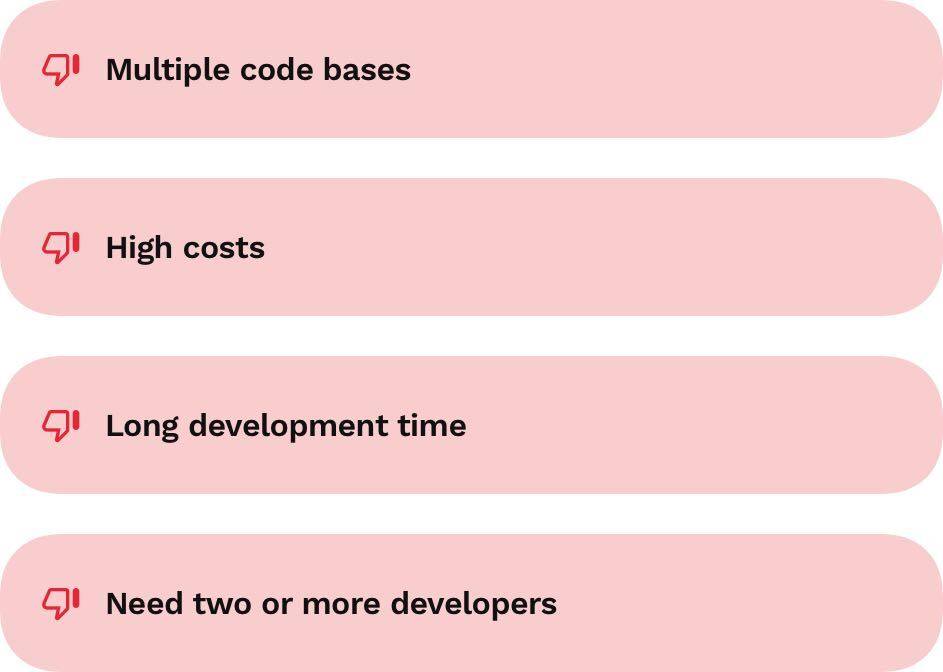 Native apps are always a good choice when you strive to create a very high-performance, complex and fit-for-purpose product. But in fact, most apps are not designed to use absolutely all the features of a device. If your app doesn't have very complex or specific features, it may be a waste of time and resources to write two apps and better to choose a cross-platform solution. It also doesn’t mean that this is the best choice for every situation.

If you want to create a mobile app, before you decide whether your app will be native, cross-platform, web or hybrid, list all the features you want in it and decide what are your requirements.

If you’re considering using the help of a mobile app development company, know that developers are always able to advise you about the solution you need for your business and will help you choose the best option.

Now let’s dig into web and hybrid apps to give you a better insight on differences between them and native apps.

The web app is accessed via a web browser on the web, e.g. Google Chrome, Firefox, Safari. They cannot be downloaded from mobile stores. They provide various functionalities but do not work offline.

While native apps are written for a specific device, most web apps are available for any platform and browser. An example of such an app is YouTube. These apps are quick and fairly easy to build, created using a single code base. However, they are not as fast and powerful as native apps.

Hybrid apps are a combination of native and web apps. That means that developers create one code base and then make small changes in it for each platform. This makes them faster to create than native apps, but they require more work than web apps.

Hybrid apps are installed on the device just like a native app — in mobile stores (Google Play, App Store, Huawei App Gallery). These apps can also use the internal functionality of the device. They therefore work a little differently from web apps and native apps.

It's a good choice for solutions that need to use device resources, but also need to be built faster and at a lower cost than a native app. An example of a hybrid app is Instagram.

In fact, native and hybrid apps are very similar from user’s point of view, so if your solution doesn't require the creation of an entirely native app, you don't have to worry about the hybrid app performing or looking worse.

Cross-platform apps are defined by the fact that they can be built for both platforms (Android and iOS) at the same time without the need for creating different versions. Native apps are unbeatable when it comes to performance. It's not a simple task to create an app that works optimally on different platforms, so there is a risk that choosing cross-platform development will result in lower performance. However, using one code base for both platforms saves a lot of time and money. As a result, cross-platform app development is becoming increasingly popular.

When to choose native app development?

Native apps are completely and comprehensively tailored for particular operating systems. This allows you to use all the features of your device, such as voice search, Google/Apple Pay, GPS navigation, system notifications. If you need the use of these in your app, it’s better to go with native solution. Native apps can also take advantage of the latest system features. You can start implementing new features the minute a system update is released (or even in Beta!) so you can perform the latest trends in the app. To give an example, that’s what happened with Android Edge To Edge. New things are available for cross-platform solutions later than in native apps.

When it comes to app design - all native apps on a given platform have a similar interface and run smoothly. Features introduced in native apps look very similar across the entire system. This makes it intuitive for users and they know how to navigate through these apps. In simple terms, if you want your app to deliver the best possible performance and user experience, and you’re going to make use of complex features, choose native app development.

Native apps also provide more security. They are protected by many different layers of the operating system. This makes them difficult to exploit. They also only use official APIs, tested on different versions of the system. Additionally, official platform releases have to wait longer than framework releases, which makes them better tested in terms of security.

You also won't encounter as many limitations in functionalities as with other technologies, as native apps only need to be compatible with one platform. You don't have to worry about whether a feature will work any worse on another system.

In summary, if you want to ensure the best security and use specific hardware features, you should choose native app development. But if you need to avoid high costs and a long-lasting project and don’t want to create a very complex solution, you should consider other options.

How to choose the right technology?

Remember that the choice of technology always depends on the specific features of the app and there is no single best solution.

If you're considering building a mobile app for mobile devices and don't know which way to go, create a plan for the project first. Decide about the features of your app and the overall look, and you will be able to assess how complex the project will be. This basis will enable you to choose the appropriate technologies.

Apps made with Flutter have become very popular recently as this technology turned out to be a great fit for almost any kind of solution. Companies choose it to build apps with Flutter for various branches and audiences. Cross-platform app development makes it possible to provide users with the same experience as with native applications. Let’s dig into the case and find out what Flutter is and how we have used its advantages in our projects.

How to proceed with mobile app development

How to proceed with mobile app development

In this article you will find the description of the whole process of mobile app development from receiving the idea, through making estimations and building the product, up to finishing the project, and of course supporting the app after release.